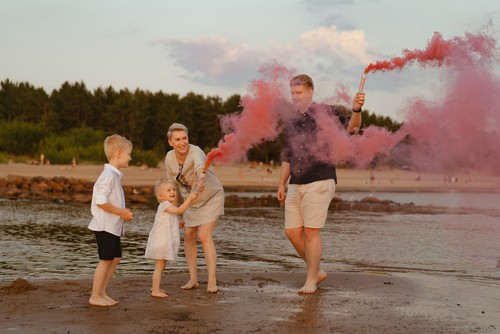 What are Gender Reveal Cannons

Gender Reveal cannons are cylindrical tubes in shape and basically leave off bright coloured smoke or confetti when you pop them. The idea is you build up the suspense in front of family and friends, and then you pop the cannon to reveal the gender of the baby depending on the smoke or confetti colour that comes out. Traditionally blue cannons are used for boys and pink cannons for girls.

Some people like to do it privately at home with friends and family. Others want to have a group recorded and post it to insta in a live video or reel. Some people post cannons to loved ones to let them enjoy the moment (Yes, they do!)

So, if you plan to use gender reveal cannons – here are a couple of things you need to keep in mind!

Take the stickers off!

If you’re prepping for a friend or close family member’s gender reveal and are planning to use cannons, ensure you take the stickers that indicate the colour of the cannons are off. This is so you can keep the surprise for parents-to-be if that’s what they have asked for. If they have asked for this, this tip should be at the top of your list.

Have you heard the phrase – go big or go home? At Babyshower.ie we know a lot of Irish women like to go big for their gender reveals. So having multiple smoke or confetti cannons for the group and popping them all together is such a great idea. Not only does it make everyone at the reveal feel closely involved, but it also gives fantastic colour photographs! Highly recommend this.

Photos, videos, and some more photos and videos, please!

Did it really happen if you didn’t get pictures and #IGContent? Of course not! So don’t forget to take pics and videos. Either set up a little tripod if you are doing it yourself. Or get a guest or family member to take photos and video. If you are really splashing out, you can also organise a photographer to come and capture the reveal professionally.

Getting everyone’s reaction on film and going back to watch these experiences years down the line will be really special.

Now it goes to say that you’ve to be careful with things like gender reveal cannons. Always remember to keep them away from kids and always use them outdoors.

With gender reveal parties becoming increasingly common in Ireland, you can also always look for inspiration online, and here at Baby shower.ie have all the cannons and poppers you need to have the best gender reveal party ever!

Free delivery on all orders over €50

Manage Cookie Consent
To provide the best experiences, we use technologies like cookies to store and/or access device information. Consenting to these technologies will allow us to process data such as browsing behavior or unique IDs on this site. Not consenting or withdrawing consent, may adversely affect certain features and functions.
Manage options Manage services Manage vendors Read more about these purposes
View preferences
{title} {title} {title}